If you’re not a five-year-old and you grew up only knowing Tink as the fairy from Peter Pan, you’ve missed a whole new realm of Neverland.  Deep within the heart of the forest, the Home Tree of the Fairies is sparkling with pixie dust.  Tinker Bell is the star of a whole new series of adventures in Pixie Hollow! 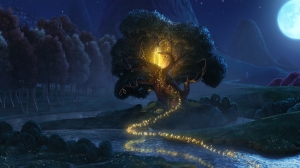 Pixie Hollow is full of all kinds of Fairies, and each of them has a special part in bringing in the seasons.  Garden-talent fairies open up the flower blossoms, water-talent fairies sprinkle dew onto the grasses and plants, and animal-talent fairies awaken the furry animals from sleeping through the winter!  There’s also light-talent fairies, fast-flying fairies, overseers of the fairies, storyteller fairies, queen and king fairies… you get the point. 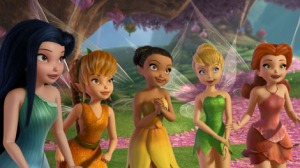 When a new fairy is born, the entire fairy community eagerly anticipates his or her arrival!  As Bell dramatically enters the fairy world, Queen Clarion explains to Bell she must now find her talent.  Bell didn’t understand what the majestic objects floating around her were supposed to be.  She asked, “how will I know?”  Queen Clarion simply states, “You will know.”

Bell slowly walks around, observing the different items representing the talents of the fairies.  As she touches each one, they disappear much to her disappointment.

This is a BIG moment.  Though she tried to choose different items, the hammer chose HER! The hammer lights up like it never has before!  It begins to follow her around while the rest of the group is amazed by the power being given to her.  The hammer reveals who she was created to be. 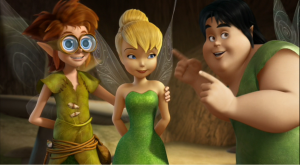 What do Tinker’s do?  Tinkers build the tools to help the other fairies do what they do best.  Tinkers always stay in Pixie Hollow.  They always stay at the Home Tree.  While they have very important things to make, they don’t get to go out to the land to awaken the seasons.

I’m a lot like Tinker Bell.  Sometimes, I’m really unsatisfied with the things God’s created me to be.  Sometimes, I try to be things I’m not.  I’ve often exclaimed in my own way,

We all journey through life trying to figure out what we are created to be.  And some of us, when we figure out who we are, aren’t all that thrilled with it because of a pre-conceived idea of the worth of our talent.

All it took for Tinker Bell to realize her worth was a good friend reminding her of her importance, and the importance of everyone doing all the things they were created to do. 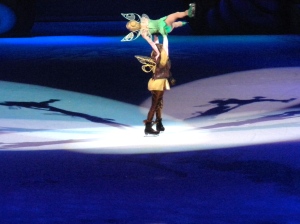 The beautiful ending to Bell’s story is that she embraces who she is as a Tinker.  Through her amazing creative engineering, she crafts some amazing contraptions that help all the other fairies save the coming of spring.

It’s never too late to embrace who God has created you to be!